A champion never lets natural talent get in the way of hard work.

“Dave Scott was on a roll. I was trying to get on one. We matched up at the season opener, a half Ironman in Panama City, Florida. I was hoping to make a bold statement in response to his dominance the previous year. It didn’t happen.”

Dave was a master at cat and mouse. He let me set the pace on the bike, staying just close enough to force me to play a hand I didn’t really have with a split that was well beyond my fitness. It took almost no time on the run for him to turn up the volume. He ended up posting the fastest run of the day and won a searing victory. But Florida is not Hawaii, and a half Ironman is not a full.

I made Kona the one and only race I really cared about winning from that point forward in 1983. I had a score to settle with Scott after feeling like he’d used me to set up his own victory in Florida. I had another score to settle with my misfortune in Hawaii after being forced out with a broken derailleur half way through the bike the previous year.

But I was just hash slinging. I had no clear picture what “being ready” for Hawaii meant. This was now my “job”. I’d been picked up by Nike and was a salaried member of Team J David, a triathlon team that was funded by a high profile investment firm in La Jolla, CA. My office was now the roads and trails around San Diego County. No more fitting training in on the weekends and early mornings before work.

By October it was clear I was in significantly better shape than I’d been in the previous year. But I wasn’t exactly overflowing with confidence. There was still this black hole of inevitability that I was going to have to face filled with a complete unknown that made me sweat at night in my bed when I thought about it.

In the years to come I’d learn how to manage this chaotic internal stuff. That would become a hallmark of my racing in Kona. But before this Ironman, it began to consume me. It went to full-blown boil when I first saw the course from the plane just minutes before landing. I broke out in a complete full body sweat. Fear can be motivating, but at the level I was feeling it, it was debilitating.

I tried to put on a look like I was rock solid in the days before the race, but I wasn’t. I decided to take some of the pressure off and forget about even trying to win. I’d start conservative and only build my speed to a point where I knew without a doubt I could manage the pain and the pace.

This was not how I liked to race, but at least by race morning I had eased some of the fear. I figured better to make this an exploratory mission and finish than to really go for it and blow completely. That was not the mindset of a champion though and I knew it.

I’d compromised myself and it bothered me. I’d reduced the risk, but knew that ultimately I wouldn’t really learn what I needed, and that was to figure out how to give it everything I have to give even if it meant giving up or even dropping out. I was on a seesaw battling with myself. But I just couldn’t go to my “give it my all” place. It scared me too much.

I paced everything patiently in the first two legs of the IRONMAN World Championship, giving up only a few minutes to Dave on the bike. The weaker goal of don’t blow up seemed intact. I tried giving a little more gas early in the marathon but still staying in the safe zone. Unfortunately, it did nothing to give me an effort that was going to keep me close to the lead. Dave applied lethal pressure in the opening miles of the run along with Scott Tinley. It would clearly be a two-man race and I was not invited.

Dave ended up faltering uncharacteristically in the final miles of the marathon fading badly, but it was still enough for win number three in Kona against a hard-charging Tinley. I nabbed third place that day.

This was only my second Ironman and my first finish in Hawaii. The third place finish was good from the standpoint of getting experience on the entire course from within the race. But it was also empty because I knew I didn’t give my best. Everyone around me was so happy for me, but I knew the truth.

I’d given into my fear of failing completely out there. I didn’t take one risk or push close to any boundary. I took the safe route through the day. But no risk, no reward as they say. Ultimately I didn’t see the “real” race, the real Ironman. That race is one where an athlete surrenders to their need to control the outcome and just commits every ounce of their being to going as fast as they can even knowing that could indeed lead to a complete meltdown. That is the real Ironman.

It’s one that can redefine you by showing you a deep strength you never knew you had. But you don’t get that gift with the seat belt on and the motor only in second gear.

It was not a total loss though. I did experience something that touched me to the core. It was running down Ali’i Drive to the finish. I’d heard the stories of how it felt. I’d seen it myself the previous year as I watched others completing their day after mine had been terminated during the bike. But to experience it personally was like nothing I’d ever known in sport. 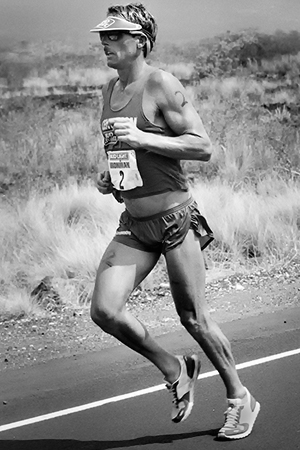 It’s the energy of being welcomed back into town by thousands cheering. It’s the stark contrast between hours alone out on the lava and then sharing the day with the crowd as the finish comes in sight. It’s reaping the rewards of months of tireless training coming into focus during those final steps of the marathon. It’s a stretch of road where the joy concentrated on it is equal and opposite to the sum total of the other 140-miles of challenge and pain. It’s an intense feeling of being humbled and grateful. It’s experiencing that the day is a gift given not a reward earned. It was an IRONMAN World Championship finish!