By 1988 every top triathlete in the world was putting Ironman on the their race calendar. I followed the crowd. I made it my main focus for the year. But I didn’t have a lot of passion around it. I just got sucked along with the momentum the IRONMAN World Championship was building. I’ll be honest. I was really starting to doubt if I had what it took to win that race. And without going for the win, I wasn’t really sure why I was going back at all. But then two days before the race Dave Scott made an announcement that put me right back in the crosshairs of potential victory.

He was out of the race! Dave had been struggling with some knee issues that year. On Thursday, two days before the start, he was forced to pull the plug. A DNS (Did Not Start) would be next to his name in the results after Saturday’s race.

I heard the news. I looked at the start list. I had beaten every other athlete racing that year. Anything short of disaster and I knew this would finally be my first IRONMAN World Championship win!

But disaster it was: a slow seeping disaster. After a smooth and predictable swim, I flatted on the bike just outside of town as I was starting to get into my rhythm. I clipped the kneejerk panic by reminding myself I’d prepared for this and could change a flat in less than a minute. That was not lethal in the big picture of an Ironman day.

I rode tubulars and always carried two spares for Kona. I figured I had never flatted ever in Hawaii even in training, so two would be more than enough. The change was not smooth, though. I’d glued the tire onto my race wheels over a month before, which was enough time to make the bond between tire and rim turn to cement. I tried yanking on it from every direction, but it wouldn’t give. Finally I threw the wheel down on the pavement in complete frustration and disbelief. How could I be so stupid! I always glued my tires on just a few days before the race so that the bond could be broken if I flatted. Not this year! Okay, calm yourself!

A few miles later, after closing back in on the field it happened again. My rear had gone flat for a second time. I had succeeded in running over probably the only two pieces of broken glass on the entire Queen K Hwy. This tire change was as quick as humanly possible since there was no month-old glue job to slow it down.

Dave Scott didn’t start. The challengers were riding together up ahead. I had to try to catch them before Hawi if I was going to have any chance of winning. Riding faster than the best in the world was no easy task knowing the marathon would be where I’d pay the price if I miscalculated by going too hard. I had to be patient in the catch. Be smart. Just breathe. Smart and breathe!

Before we made the turn to Kawaihae I was back with the main group. From that point forward I was trying to do all the little things I could to conserve energy. I didn’t try to close the small gaps in the long line of competitors. I just rode steady. I sunk my upper body down between my shoulder blades and put all the weight on my aero bar pads with my elbows to keep any tension out of my torso. I soft-pedaled through the pedal stroke as much as I could to relax my legs. Anything I could do to use less oxygen and less energy I was doing it. There was a price for catching back up. I was just hoping it wouldn’t be too much.

I was still pretty positive though. Looking around I didn’t see anyone who I felt could outrun me. Mike Pigg, Scott Molina? I was confident.Scott Tinley? He was still behind the lead group that I was now with. No one had the Kona marathon I knew I could put together if I just set things up right. But that wasn’t going to happen!

At around mile seventy-five I was bouncing off the rim of yet another tire that was losing air. I was out of spares. I stopped, sat down and waited. It took over fifteen-minutes for the support vehicle with extra wheels to find me. I couldn’t believe it. Three flats! I was getting more cynical by the second. Why me? How could I get three flats? Why should I even try to get back in it? Dave Scott handed me the victory and I blew it. 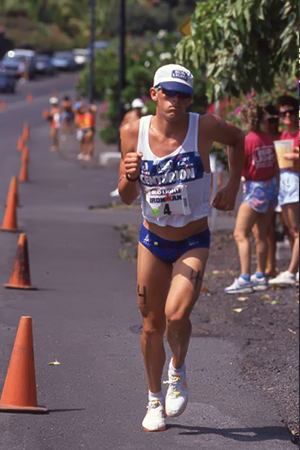 My tire was flat. My motivation was flat. My body felt stiff and flat. My life felt flat. Why was I there anyway? I was out of the game, out of the hunt. Someone else was going to win. I would not, once again.

This was my sixth Ironman and now I was paralyzed at the side of the road with a mechanical failure. I was a professional. It was my job to look down at the pavement and avoid anything that could cause a flat. I’d failed in that mission three times on the same day. That was a record number of times. No pro had flatted three times in Kona. Getting the most flats ever in the history of the race was not a distinction I was happy to own.

The support vehicle finally found me. They gave me a wheel didn’t work well with my derailleur. I could only get the chain to sit smoothly in about half the cogs in the cassette. The other half just skipped. It got me to the bike finish, but I was extremely negative, visionless and without motivation. Why should I keep going?

Two miles into the run I felt like I weighed about a thousand pounds. I spotted my dad cheering for me hoping to bolster my moral. I stopped and told him I was done. I was finished. We walked for a few minutes together toward the hotel that I was staying at. We didn’t exchanging a word.

Then something shifted. In that silence I started to realize that I still had what it took to finish, and at the Hawaiian Ironman completing the race is the most important reason ever to keep going. I knew I could do that! I had an obligation to the Island and to myself to fulfill that one purpose. I told my dad I’d see him at the finish and started to run again.

Fifth was where I ended up. I was farther out of the lead than any of my other Ironman finishes on a day when I thought I had the best chance ever to win. My marathon split was the only one under three-hours, but that was of little solace.

In Hawaii I seemed to be fighting some unseen force that was crippling my potential. I was beginning to believe what my family, my friends and the press were saying. They were all in agreement that the Ironman was just not for me. They’d say things like, “Go to the races where you’ve shown you can be the champion. There’s something about Hawaii that’s just not for you. Maybe it’s too long. Maybe it’s too hot.” They had a million compelling reasons why I shouldn’t go back.

My setbacks weren’t trivial. In six IRONMAN World Championships I’d only been able to complete the marathon twice without walking. It’s tough to win in Hawaii when you walk on the marathon. I’d had two devastating mechanical failures: one that forced me out of the race and another that likely cost me victory. I’d ended up in the hospital with internal bleeding. That was life threatening. Yes, there were a lot of compelling reasons why I should never set foot on that start line again