"self confidence does not exist in thought. it is housed in silence."

Ironman 1991 | Penthouse to Outhouse and Back

How perfect do things have to go before all the imperfections outweigh the bits that need to go right and the eventual outcome is far less than you had hoped for? I began peeling away the layers to that question in 1991.

For nearly three years I had been on a roll. I’d won every race I entered starting way back in October 1988 at the Bermuda International Triathlon. My streak was sitting at twenty-one consecutive victories in races of all distances from Olympic to Ironman. Outside magazine had placed me on its cover just before my first race in 1991. The title above my photo read “Astral Jock: Why No One Can Beat This Man.” I never got that 22nd victory!

I’d had trouble getting my momentum going in training. There wasn’t any single reason. Maybe it was because I just wasn’t as fired up as normal when the first of the year rolled around. Maybe I was getting too casual about the other guys out there. I hadn’t had to dig into the deep corners of my soul to make any of those twenty-one consecutive victories happen. They just seemed to come my way. Both of those reasons were red flags that I should have pivoted on and used to come up with new ways to get myself going. But I didn’t, and I paid for it. My first race in the spring of 1991 was on the Gold Coast in Australia. It didn’t go my way.

A scrappy powerhouse named Mike Pigg ended up handing me my first defeat in almost three years. A great race at the IRONMAN World Championship in October was made by the training I did in the winter and spring. If the first three or four months of the season were lackluster it would be very difficult to cram and make things happen in the last months before Kona.

It was already April 28th. I should have been on a good trajectory already. But that race on the Gold Coast showed me I was barely in the kind of shape I’d been in by February the two previous years.

I was already feeling the pressure of Kona. I flew home from Australia, drove out to Boulder from San Diego and started to load on the volume. I needed to shorten the route to having a solid base. That process takes time and I knew it. I was just hoping that I could double up on some of my long runs for a few weeks, add an extra hour or two onto my long rides and have it all go in the fitness bank account for October. The two previous seasons had been flawless. There was absolutely nothing that had gone wrong. No matter what I did in training it seemed to pay off on race day. Every race strategy worked. This year was different. I suffered my first loss since Ironman in October of 1988. It was the first chink in my armor.

The second came in Embrun, France on August 15th. It was my final fast effort before I did a big build up of training for Kona. Embrun had the most demanding bike course of any Olympic distance race I’d ever experienced. It was almost 30km of climbing in the first part and then a solid 10km of steep curving downhills in the last bit. I crashed going around one of those tight turns. My speed was too fast. There was no guardrail and a huge cliff on the other side. I had to lay the bike down on the pavement to avoid going over the cliff. I ended up winning the race against a hard charging Simon Lessing, but it put chink number two in the armor.

The second came in Embrun, France on August 15th. It was my final fast effort before I did a big build up of training for Kona. Embrun had the most demanding bike course of any Olympic distance race I’d ever experienced. It was almost 30km of climbing in the first part and then a solid 10km of steep curving downhills in the last bit. I crashed going around one of those tight turns. My speed was too fast. There was no guardrail and a huge cliff on the other side. I had to lay the bike down on the pavement to avoid going over the cliff. I ended up winning the race against a hard charging Simon Lessing, but it put chink number two in the armor. The plan was to fly home and load up for the last push to Kona. Unfortunately my hip was messed up from the crash and I had to take it pretty easy for almost two weeks. I did what I could but this was not going as planned. I was getting desperate. I never do well with desperate! But eventually the hip healed and I could train normally.

I tried to make up for lost time and did a massive week of training just before flying to my final race before Hawaii. It was a half Ironman in Texas. I went to the running track three days before the race just to try to freshen up my endurance-fatigued legs. Halfway through a set of strides my hamstring completely locked up and was ready to tear. I had to stop. I couldn’t run. Chink number three.

Greg Welch was at the Texas event. He had finished third behind Dave and me in 1989 at the Ironman so I knew he was a huge threat. He and I swam and rode together. We started the run also together, but just a few steps into it my hamstring locked again. I tried going slowly for about a mile but it would not let loose. That day became the one and only DNF of my career that happened because of an injury. Welch won the race. He would be in Hawaii.

I woke up every day for the next month thinking that it would be the day my hamstring would be okay again. But it never happened. During those last weeks before Kona I was reduced to running no faster than a nine-minute mile to prevent my hamstring from tearing. It was better than nothing, but clearly not what I was hoping to log going into the biggest race of my season. A year earlier at IRONMAN World Championship I was never really threatened for the win. This year would be completely different. I knew it didn’t matter if I was confident or not. If my hamstring locked on the run, there would be no chance of winning and probably very little chance to even finish. I needed a miracle! That hope would come from something that had nothing to do with my logbook.

I’d started studying and practicing the Huichol Indian tradition with Brant Secunda shortly after my Ironman in 1989. It was in that year’s race where I had a vision of Brant’s adopted grandfather Don José that led me to victory. Part of the Huichol tradition teaches how to go on pilgrimage and leave offerings at powerful places in nature to ask for what is important in your life.

The Island of Hawaii is one of those places. Even from my very first Ironman in 1982 I could feel that the energy of Hawaii was so strong I could almost grab ahold of it. It was present everywhere. 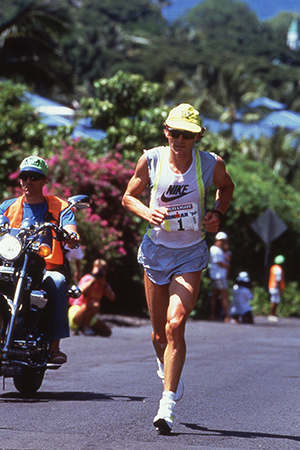 Before learning from Brant I had been intimidated by it. Now I had a way to embrace that same energy and connect with it.

When I arrived in Kona I had no idea if a miracle would enable me to run during the marathon or if I’d end up injured and out of the race. I hadn’t done one run that tested my speed or ability to go at race pace. I was leaving that unknown for race day. I asked the Island for help. I left my offerings a few days before the race at a quiet place I liked to go to along the ocean. It’s a peaceful spot that feels full of the energy of the Island. I asked that I could simply have a great race. A great race is something for everyone. It can extend all the way back to the very last finisher coming across the finish line just before midnight. I’d leave it up to Hawaii to work out what a great race meant. I was simply asking that no matter how I managed the day it would be a great race for me.

Welch was on form and even stronger than he’d been in Texas. My swim was faster than his by 48-seconds, but his bike faster than mine by almost the same margin at 46-seconds. I started the marathon in his shadow not knowing if I would even be able to run.

I eased into the first couple of steps full well knowing that running at race pace might completely rip my fickle hamstring. I took a stride. It tightened. I took the next. It tightened a bit more. I took the third stride. It unlocked and swung free!

Welch set the pace through town. But Palani Road hill shortened his stride, and it never quite opened back up. The next twenty miles facing us out in the lava was like coming home for me. My stride loosened even further. I moved into another gear and upped my pace. It opened up a gap that Welch never closed. In the end I won my third IRONMAN World Championship by a margin of six-minutes.

It was a win that was much less a celebration of victory than it was a relief that I had been able to complete the day successfully. I had a lot of time in lead after pulling away from Welch where I could feel the immensity of that position. I had the same feeling like I’d had the year before of clearing the path for others to follow. It was humbling. Ironman is an race with depth that is incredibly complex to win. I could feel the Island watching, looking down at me and every other competitor out there. Nothing was taking place without its graces, not me being in the lead, not the last person bringing up the rear. It’s all a gift.

The day worked out better than I had thought possible when I woke up race morning. But it was a challenge. Until those first steps of the marathon I had no idea if I would even be able to run a step. It took energy to contain that doubt and uncertainty and just keep focused on possibility. Then even when the hamstring did let go, Welch challenged me for miles. Yes, I’d run almost every step of the marathon with Scott two years earlier. But this was different.

It did work out. It was a great race. I was humbled and honored running in the lead with no one around for the closing miles back to town carving the first etch in the picture every competitor would contribute to. I was grateful that even with the chinks I was able to have another great race in Hawaii!