”Millions of reasons will beg you to quit. Wait and listen for the one good one that requires you to continue.“

One day in late March I headed out for a long ride. I couldn’t find anyone to come with me. I wasn’t happy about that at all. I liked the company of my training partners on long rides. It helped with the motivation. The ride was flat and I was hoping to do it fast just to get it over sooner. Ten miles into it I went through an intersection. My mind was wandering. A truck accelerated and turned right into me, hitting me and throwing my body into the air. I came down hard on the pavement and crumpled to the ground.

At five minutes to 7:00am I was floating in Kailua Bay on race Resistance to the work my dreams are asking me to do to fulfill them always ends up bad. This was no exception. It was the last day of winter, the season of darkness, and I was resisting going on that ride. I lacked a fundamental deep vision of why I wanted to race Hawaii again. Habit is not a valid reason. Winning doesn’t necessarily come dripping with meaning.

My collarbone was broken, and so was my spirit. I was rushed to the hospital. Late March and early April were when I needed to lay the critical foundation of fitness that October would require. Without it, I had no hope of winning. And with a broken bone sidelining me for the next six weeks, that dream seemed impossible.

Later that night back at my home with my arm in a sling I stood up to walk down the hallway that lead to my bedroom. I was wallowing in the crushing physical and emotional blow that had happened that morning. The next thing I knew I was coming back to consciousness looking up at the ceiling, blood dripping down my face.

I had passed out and split open the skin on my head. It was too much. Blood was pouring down my face, but the tears were outpacing the gash. I was no longer of this world, but not part of another.

There was no thread from my past that was going to carry me into the future. I was caught in a no man’s land where yesterday’s motivations held no importance and not one reason to continue was anchoring me.

I had three Ironman victories. That had been a focus for the bulk of my adult life. It held no meaning as I lay bleeding on the floor. Nothing held meaning in that moment preceding my second trip to the hospital on the same day.

Then something deep and distant began to call from the core of my being. It was the reason to go on. It had to do with exploring the yet to be discovered corners of my inner character, to developing myself as a person through that incredibly difficult race called the Ironman. It had nothing to do with winning, but everything to do with going back to bring as much personal perfection as I could to it, and having that be the goal of the day. It’s that kind of quest that inspires change and hope and brings joy to those who witness it or even read about it later.

But I had to get healthy! In late 1990 I met Brant Secunda, who is the adopted grandson of Don José, the great shaman whose vision carried me to victory in 1989. I started studying with him and learning about the Huichol Indian tradition. It was helping broaden my understanding of life. Brant did two healings on my collarbone just a couple of days after my life-altering accident. Within two weeks I was back training, four less than the docs said I could. The devastation of the accident left me no other choice but to delve deeply into athletic performance that is both physical and spiritual, to training my body as well as my inner environment, to make the place inside me that no one else can see stable and strong, and mostly to being grateful to get to the start line.

By October I was supremely ready to do something I had never done before. I didn’t know what that might be, but I was ready. Yet, even with solid training, a solid collarbone and a steady interior, I had one fear. And that was the possibility of having to run next to someone who was a better runner than I was. But going through the athletes racing, I couldn’t come up with one who I felt was stronger as a runner. That is until the press conference two days before the championship.

One unlikely athlete came that I had no idea would be in Kona. It was Cristian Bustos of Chile. He had outrun me and beaten me in Pucon, Chile in January of that year. In the ten miles we ran there he outsplit me by 5-minutes. Stinging! He was sitting at the athlete table when I arrived at the press conference. This was it. He was my fear in the flesh! If he out-ran me by the same margin per mile, he could beat me by over 13-minutes.

But Kona is not Chile, and I hoped race day would certainly be different. Well, it wasn’t! We came off the bike together just like Chile. He put the pressure on immediately opening up a gap of 30-seconds in the first mile. It took me another three before I was able to real him back in and close the gap. I pulled up next to him. He took one look at me and upped it another notch! He knew he could run and was not afraid to exploit that strength.

It took a long struggling mile trying to match his pace before I finally surrendered to the reality of that day. It was not going to be easy, 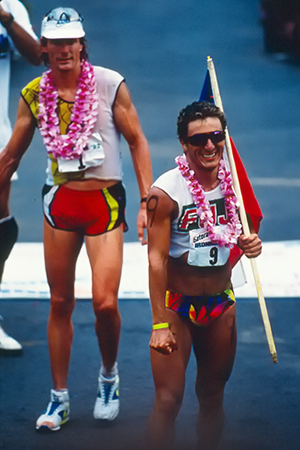 and I was going to have to find a way to honor the strength of this great athlete if I was to have any hope of bringing the best out of myself that was free of worry about the outcome. Finally I took a long deep breath that seemed to connect me to timelessness and I relaxed.

The dynamic changed in that instant. It got imperceptibly easier to match Christian’s pace. A mile later I knew if I waited and let him wear down I could make a move. That took until we passed the half marathon point, nearly twice as far as the break happened with Greg Welch the year prior. The winning margin at the end was just over 7-minutes, nearly identical to the year previous, but under more extreme circumstances. Ironman was working me in a direction that was requiring me to bring a new level to it each and every year. From the outside it may have looked like I had it all wired. But you never have Ironman wired!