This was it! My final Ironman. There had never been a decision I had made that I was more sure of. But with that finality came risk. If the day went south, there would be no redemption, and with an unusually depleted physical state that summer, there looked to be very little chance of the race going anything like I was hoping for.

There was a huge challenge facing me. I was 37-years old. No one had every won Ironman Hawaii at that age. There was no template I could pull up that would tell me how to do that. My toughest competitors were going to be ten and fifteen years younger than I was. They could put in massive miles. My peak of that insanity and that advantage was now in the past. I was trying to win six Ironman titles in six starts. Not even Dave Scott had done that. Huge levels of impossibility faced me. But I like that kind of challenge!

I’d backed away from Ironman racing the previous year because my body was sounding the alarms of a deep long-term fatigue that had built up. But even a year taking things relatively easy was proving to be not enough. I’d only had a handful of days in the first half of my season where my body felt like I was operating at full capacity. Most others were like fighting through mud.

Something was off much more than could be explained away by age. A blood test in July revealed that all my hormone levels were more like that of a decrepit 60-year old than a world-class athlete targeting a win at the Ironman. My testosterone was severely depleted. Growth hormone was hard to even find.

My DHEA levels were geriatric. Stress hormones were off the charts. My body was a mess. The only solutions being presented by the western experts were either a six-month sabbatical from training (not an option with Kona about three months away) or injections of a hormonal cocktail that would have gotten me banned for a few lifetimes (also not an option). There had to be another way!

Training conservatively, I had been able to win Japan Ironman, but it was not without struggle. In early August, two weeks later, I arrived at a retreat in Alaska that Brant Secunda was leading. I had been studying with him for almost six years and knew this break from triathlons was critical. I would spend eight days emphasizing a very different focus than just about every other Ironman athlete in the world who took August 1st as the launch date into full-on Ironman Hawaii training.

During those days I would not swim a lap, bike a mile or run a step. But I would work intensively learning practices that helped me develop a champion’s mindset, one where calm and quiet could be called up even in the toughest moments of life. Brant would help me expand my ability to feel at home everywhere on this earth and in any situation, even in the places that can feel the most intense like the Big Island of Hawaii. These were skills that had nothing to do with triathlons, but that had everything to do with bolstering my chances of having the greatest race of my career in three months time.

Brant also did a number of traditional Huichol healings to bring my body back to full capacity. He saw that I was severely depleted and went to work as only a true shaman can to help me arrive in one piece in October. The doorway of possibility seemed to open back up!

At five minutes to 7:00am on October 7, 1995 I was floating in Kailua Bay. I felt a peace I’d never experienced that close to the race start. Watching the Ironman the year before helped erase about ninety percent of the normal prerace anxiety by showing me it was all fabricated anyway. I was calm. I felt immense gratitude that I was about to embark on a day that had absolutely no certainty; one where surrendering to the calls of the Island was my obligation. I was just one of many taking part in something greater than any one of us could do on our own. My core found peace knowing that there is no chance of failure when success is measured in increments of gratitude rather than segments of time called seconds and minutes.

It’s one thing to feel that calm before the day begins to unfold. It’s another to find it when things totally unravel. My big hope was a sixth win and a new course record. The record hope went out the door early in the bike. Twenty miles into it I was battling a headwind down a long sloping downgrade that normally sees speeds in excess of 30 mph. On this day it was 13 mph. On a downgrade! No record!

The sixth win was even less likely by the end of the bike. I was 13:30 down on the leader, a 24-year old German soldier named Thomas Hellreigel. No one had ever closed that gap to be the champion. 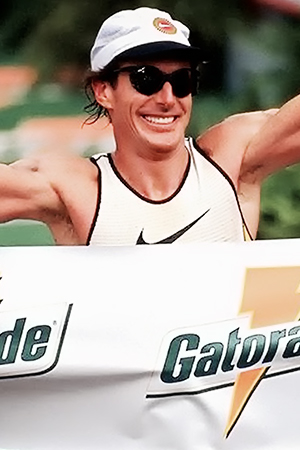 Three miles later I was ready to quit. Nothing was working. My body was not responding. My mind was going crazy with all the chatter that does not help out. “Hellreigel’s going to win! He’s thirteen years younger than me. I should have never tried to come back. I have to make up thirty-seconds a mile every single mile of this marathon just to catch him at the finish line. That’s impossible!

Impossible could be a great victory taking shape, but only if I stayed fully engaged. I was totally disengaged! I was lost in my negative chatter. Then I remembered all my training and my training partners who had helped me get ready. I remembered my son who was seeing me race for the first time in his life. I remembered the tremendous work Brant had done to help turn me every piece of my being around. I remembered the real goal of every Ironman day…get to the finish!

That became my mantra, my commitment. This was my time! I’d call up every ounce of inner strength to make that happen, even if I had to walk a thousand steps of the next twenty-three miles to cross the finish line banner on Ali’i Drive.

I moved from 5th to 4th, and eventually into 3rd. Just past the half marathon point I slide into 2nd. With eight miles to go I was told I was four-minutes behind Hellreigel. I might catch him at the finish line, but that was an impossible option from a champion’s mindset.

I needed something extra. I lowered the periscope focused on Hellreigel. He was still so far ahead I couldn’t even see him anyway. I surrendered to having to give everything I had with absolutely no guarantee that things would turn out like I had envisioned when the day began. I called out to The Big Island for help.

The gap began to shrink. My pace closed faster than thirty-seconds a mile. I was charging, still with no thought about whether or not it would be enough. At mile twenty I could see Hellreigel. At mile twenty-three I came up behind him. He knew I was there. He didn’t have to look back. I surged. I made the pass. And even though he picked up his pace, he was covering ground slower than I was. Three miles later I won my sixth and final Ironman World Championship.

Crossing the finish line I looked to my right and saw Bill Schmidt, the Vice-President of Global Sports Marketing for Gatorade smiling and holding the finish tape and it reminded me to soak up this moment. It seemed like just yesterday that I was crossing the finish line with just a few people looking on, and here I was finishing my final Ironman with the cheering of thousands of spectators cheering me on. Without Bill and the support of the brand he'd brought to the Big Island, the organization that now managed the race, and the army of local volunteers who toiled through the nights and days to put on the event, I would not have had a career that culminated in my sixth victory.

When I exited the bike to run transition I thought I was having the worst Ironman of my career. But now looking back I can see that this was the greatest race I ever put together. And what made it so incredible were the massive levels of impossibility I had to face not only on race day but also in the months leading up to it.

There were thousands of moments in the race when I wanted to quit, to disengage and just give up. But those impossible moments transformed into a collective mass that added up to something extremely special. The greatest victories can never be seen. And on that day they were the thousands of times I won a victory over a lesser part of myself that wanted to given in, to back off, even quit. I looked like a metronome on the NBC footage. I was not at all rock solid. I was human. But I also found a way to bring back that place of quiet inside that even in the toughest of moments was able to look around at where I was and what I was doing and just say WOW!